2017 Korean TV series in which Park Bo-young plays the role of a superhuman woman with Park Hyung-Sik and Jisoo. From February 24, 2017, to April 15, it was aired on JTBC as 16 episodes.
On a gloomy afternoon, high school student Ahn Min-hyuk (Park Hyung-Sik) sits behind a bus with a bouquet. Suddenly one of the tires bursts and soon the bus goes down the hill. The driver desperately tries to regain control in order to discover that the brakes are broken.
He turned to the right, barely avoiding the oncoming vehicle. However, they turn to the path of two pedestrians standing on the side of the road.
Embarrassed, he stepped on the brakes, stepped forward, closed his eyes, and saw no fear approaching. But when he opened his eyes again, the bus stopped on the track and everything was intact.
Min-hyuk, who is still half asleep, answers the phone and introduces himself as the CEO of Ain Soft. A disguised and threatening voice reminds Minhyuk that he warned Minhyuk to delete the RPG game'Albertin Chronicle'. Otherwise, Minhyuk will die.
Min-hyuk, anxious in the middle of the night, barks that the men's threat, who is awake during the day and able to feel the fear properly, will be more frightening. The voice continues with an ominous warning until Minhyuk is annoyed and hangs up the phone.
That morning, Do Bong-soon (Park Bo-young) has a bite. She gets a notification on the phone stating she hasn't been chosen for work.
Bong-soon is not surprised by the rejection, immediately studies her resume (although notably rare), and rewrites her introduction. He introduced himself as Do Bong-soon, who lives in Dobong-dong, Dobong-gu, and added that he was somewhat unique.
Bong-soon talks about the unique history of his family and first explains that he is super strong. Her strength is a hereditary trait inherited from a woman in her family, starting with her ancestor Park Gaebun, who defeated the enemy with stones during the siege of Haengju during the Joseon Dynasty. Bong-soon secretly adds that there is a secret that accompanies the power he inherited, and a few generations later, Bong-soon's mother, Hwang Jin-i (Shim Hye-jin), ignored the warning and used his abilities to become a world champion weightlifter. At first, it seemed that the gods did not punish her because she brought pride to the country.
But soon after Jinyi's success, he was arrogant, selfish, and began to harass the weak. And her punishment was not expedited on her, but in the end, she lost power.
At the lowest point, Jin-i met Chil-gu (Yoo Jae-myeong), who was also an ordinary wrestler and gave birth to Bong-soon and twin brother Do Bong-ki (Ahn Woo-Yeon). ).
Born minutes before the twins, Bong-soon's first action in the world was to knock down one of the hospital staff with an unusually strong fist.
As he grew up, Bong-soon struggled with his desire to hide his strength and the urge to fight the injustice he saw in the world. Explain that sometimes she refrained from intervening in wrongdoings because she wanted to live a normal life. 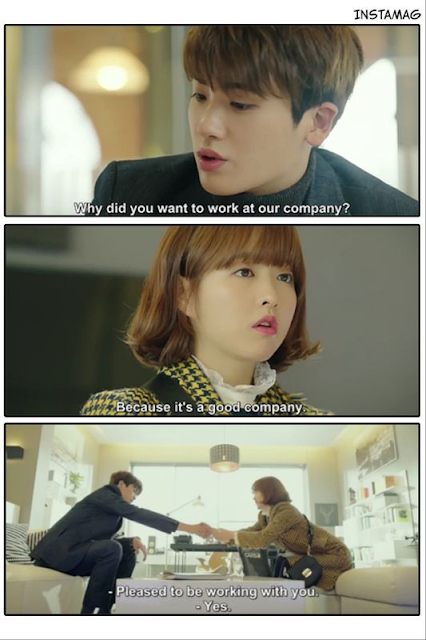 In the back window, Min-hyuk finds a girl in a pink hoodie at the back of the bus. She turns around without revealing her face and starts walking the road.
Min-hyuk was fascinated to see the girl she left. Apparently feeling his curiosity, she stopped as the wind began to pull off her hair by holding the hood of her sweater and turning slightly towards him.
Just before the hood falls, a ringtone rings in the background, and Min-hyuk, an adult, takes it from his dream. He's hard to wake up and complain about not being able to see the girl's face.
Her dream is to create a video game with herself as the main character. She is a policeman Inguk-du (Jisoo) who desperately wants to become a delicate and elegant woman who is the ideal type of unrequited love. Thanks to her power, she becomes a bodyguard for Ain Min-hyuk (Park Hyung-Sik), a wealthy heir, CEO of the gaming company Ainsoft. Unlike Kook-du, Minhyuk is a mischievous, a little spoiled, nerdy guy who doesn't care about the rules and hates the police. He was recently threatened by anonymity and even stalked, and he hired Bong-soon as his bodyguard after witnessing Bong-soon beating a crowd of construction workers while threatening an elementary school bus driver.
A series of kidnappings occur in Dobong-dong, where Bong-soon lives, and she decides to catch a criminal who aims for a close friend. Use Minhyuk's help and training to control your strength and use it for good things. Minhyuk and Bongsoon discover that their relationship is growing even further.
However, things bothered them, and a turning point to watch the drama took place. ???.
Strong Girl Bong-soon